Political uncertainty has descended on Pakistan as the combined opposition, seeking to dislodge the government of Prime Minister Imran Khan, has gathered under the banner of the Pakistan Democratic Movement (PDM). While the conflict may appear sudden, its roots lie in the 2018 general election, which the opposition claims was rigged by the military to carry the Pakistan Tehrik-e-Insaf (PTI) to power. With the government struggling to manage the economy and govern, and the opposition facing further parliamentary marginalization, the PDM has emerged as the most significant challenge to the PTI government so far. The PDM is also seeking to roll back the influence of the military in politics.

The prospects of unseating Prime Minister Khan, however, are far from clear, even for a unified opposition with a significant parliamentary presence and the ability to stage mass public protests. Across the past three parliaments and despite multiple attempts, no government has been deposed by the opposition, and Khan’s government has already survived a challenge in October-November 2019 when Jamiat-e-Ulema Islam’s (JUI-F) Fazlur Rehman led a march to Islamabad. The PDM’s broader goal of civilian supremacy appears elusive, too, and is rendered more complicated by the presence of an elected civilian government. Previous challenges to military domination have come at a time of direct military rule.

The formation of the PDM in September came as Pakistan weathered the first wave of the coronavirus pandemic relatively unscathed and Khan began his third year in office. While the PTI government has struggled to deliver economic growth, control inflation and institute governance reforms, the government had reason to believe it was beginning to turn the corner. That was in part because of the relatively low impact of the coronavirus in Pakistan through the summer. Whereas much of the national leadership had sought a national lockdown to protect a fragile healthcare system, Khan prioritized keeping the economy open to the fullest extent possible. By the end of the first wave of the pandemic, his big bet appeared to have paid off.

Even so, the PTI government has significant vulnerabilities. Economic growth had slowed precipitously even before the pandemic; inflation, particularly of food items and in rural areas, is high; and in the province of Punjab, the political center of Pakistan, Khan’s hand-picked chief minister, Usman Buzdar, has struggled to assert control and is unpopular compared to Shahbaz Sharif, the Pakistan Muslim League-Nawaz’s (PML-N) chief minister of Punjab from 2008-2018.

A combination, then, of seeking to capitalize on the PTI government’s vulnerabilities and the possibility of further political marginalization appears to have spurred the opposition to take to the streets. A months-long series of protest rallies across Pakistan has now concluded and the PDM has called for a “long march” to Islamabad in February to unseat the prime minister.

In the main, the PDM consists of the PML-N, the Pakistan People’s Party (PPP) and the JUI-F. However, the addition of a number of smaller regional and ethnic parties has added a national outlook to the opposition conglomeration and the PDM has held large rallies in all four provinces. And while the PDM’s manifesto is wide-ranging, its principal goals appear to be the ouster of the PTI government, fresh national elections, and the withdrawal of the powerful military from the political realm. However, it is unclear if the PDM can achieve its principal aims and if the major political parties in the PDM can remain united on strategy.

A fundamental problem for the PDM is the constitutional path to ousting a prime minister and his government.

Because the PTI government is a coalition, unseating the prime minister in a vote of no confidence would require virtually all other parties (including those benefiting from membership in the ruling coalition) to vote against the PTI—an unlikely prospect given the fractured composition of the parliament. The possibility of Khan’s resignation relies on the opposition creating an environment of intolerable political pressure for the government. To that end, the opposition has threatened to resign en masse from the national and provincial assemblies, a high-stakes gamble that would see the PPP give up its provincial government in Sindh and would leave the PTI without an opposition in the assemblies. Were the opposition to resign from the assemblies, the Senate elections that must be held by March could face legal challenge and delay.

If the opposition resigns, Khan has vowed to push ahead with by-elections, and the minority coalition could be locked out of the national and provincial assemblies altogether as a result.

It also remains unclear whether the PPP would in fact surrender its government in Sindh, which it has held since 2008, particularly when the party could not expect to make big gains in the other provinces.

More likely, the PDM is calculating that a prolonged stand-off with the PTI government, perhaps over the course of a February sit-in in Islamabad, will grind the business of government to a halt and create a crisis that draws in other actors—especially the military—to help push Khan out. Seeking third-party intervention, particularly by the military, however, would run contrary to the PDM’s goals of establishing a democratic polity and having the military leadership withdraw from politics. Therein lies an apparent divide in the PDM between elements seeking a fundamental rebalancing of civil-military ties and those seeking a less-ambitious outcome in the exit of Khan and his government.

Leading the more ambitious camp in the PDM is former Prime Minister Nawaz Sharif, the de facto leader of the PML-N. Addressing PDM rallies by video link from London, Sharif has focused on the alleged role of the military leadership in creating and supporting the Khan government. Sharif has accused army chief Gen. Qamar Bajwa and Gen. Faiz Hameed, director general of Inter-Services Intelligence, of rigging the 2018 general elections in favor of Khan and the PTI.

The Sharif allegations are not new: All major opposition parties have claimed that the 2018 elections were rigged and since the beginning of Khan’s term opposition figures have referred to the prime minister as “selected” by “selectors,” a reference to the military leadership. But Sharif’s recent bluntness has drawn the generals into public controversy in a manner they usually seek to avoid. The military’s powerful behind-the-scenes political role depends, in part, on projecting itself as a national institution above partisan politics.

While Sharif’s challenge to the military leadership is novel for an opposition politician, especially one of Sharif’s stature from Punjab, it is unclear how far others in the PDM, including in the PML-N itself, are ready to go. It also remains to be seen if Sharif’s combative speech-making translates into specific demands and an effective strategy in the long battle for civilian supremacy in Pakistan. Meanwhile, Khan has denounced Sharif’s allegations and attempted to cover his political flanks by aligning ever more closely with the military leadership.

As the political crisis grinds on through the winter, there are challenges for both the government and the opposition.

The PTI may face further public discontent if economic conditions—particularly inflation—fail to stabilize or improve. Chronic energy shortages over the winter could be exacerbated this year by the government’s mismanagement of energy imports, while a return to the suspended IMF program may force an increase in energy prices, which disproportionately affects less-well-off people. A second wave of coronavirus could again force difficult decisions about how to keep the economy afloat while protecting a fragile healthcare system.

For the opposition, another wave of infections this winter will increase pressure to suspend its campaign until the spring, breaking the momentum it has sought to build and carrying the government past the senate elections.

The upcoming challenges for both sides suggest that an unwelcome stalemate could persist. The PTI government may survive, but its popularity will continue to sag as it struggles to address economic and governance challenges; the PDM’s quest to oust the prime minister may fail, but it will keep the political temperature at a level where the business of government slows to a crawl. And if a difficult winter for all sides seems certain, it is far from clear that spring will bring a thaw. 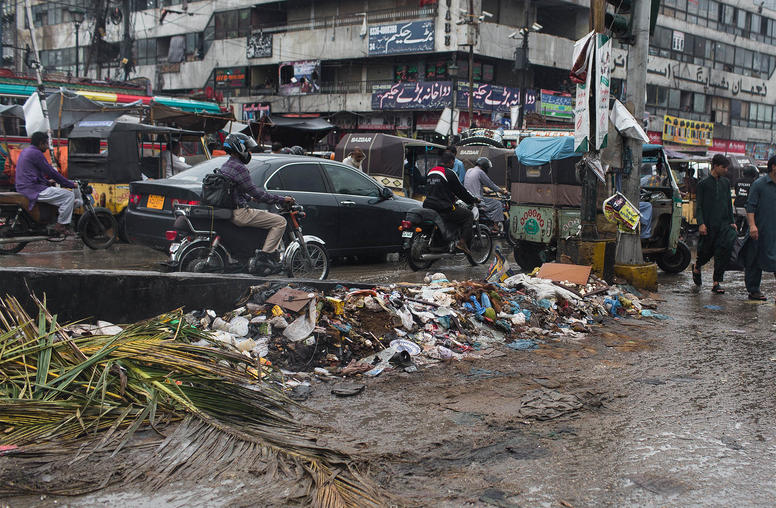 Many parts of Pakistan have always struggled with flooding, especially over the last decade, due in part to climate change as weather events have become more extreme. But for Pakistan’s largest city Karachi, August saw immense rainfall—breaking all previous records in the past century—and widespread flooding that brought the city to a standstill. USIP’s Jumaina Siddiqui and Cyril Almeida look at why Karachi’s flooding situation is so dire, how contentious political dynamics have impeded governance reforms in the city, and what can be done to prevent future humanitarian disasters. 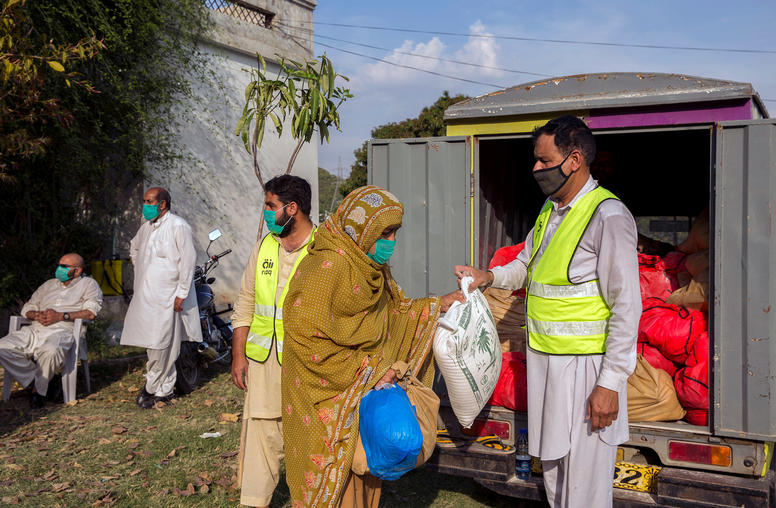 At the turn of the century, Pakistan had the highest GDP per capita when compared with India, Bangladesh, and Vietnam. Twenty years later, it is at the bottom of the group. Political upheaval, a violent insurgency fed by the war in Afghanistan, and the inability of successive governments to carry out reforms are to blame for this decline. Today, a polarized political environment and elite intrigue among civilian, judicial, and military institutions has made sustainable economic growth and reforms that much more unlikely. The COVID-19 pandemic has further sharpened the challenge.