On August 18, an argument over promotions at a military base outside of Bamako was the final spark that caused rising tensions to boil over into a mutiny. By midnight, President Ibrahim Boubacar Keita announced his resignation on the state-run television network. This dramatic chain of events followed three months of protests. Since June, tens of thousands of Malians have hit the streets to call for Keita’s resignation, and the dissolution of the National Assembly and the Constitutional Court. As the country grapples with an intractable insurgency and eight years of instability, anger over the government’s failure to resolve conflict, respect democratic norms, and provide basic services pushed citizens and the military to their boiling point. Instability in Mali has already led to destabilization in the Sahel, a region in West Africa with a host of interconnected challenges increasingly exploited by terrorist groups like ISIS and al-Qaida. What comes next in Mali over the coming months could have significant implications for the country’s democracy and on the stability of the entire region.

In recent years, the United States, France and the U.N. have deployed thousands of military advisers and troops to the region. But large investments in the military without matching efforts to strengthen governance meant that the ground remained fertile for the August 18 coup. Here are five things to know about Mali’s coup and its broader challenges.

At first glance, the current situation resembles Mali’s 2012 military coup, which was led by junior military officers frustrated with the government’s handling of a Tuareg insurgency in the north of the country. Overthrowing the democratically elected government opened up a power vacuum that violent extremist groups exploited, and the Malian armed forces—with support from the U.N., the European Union, and the United States—have struggled to bring under control ever since. As in 2012, the August 18 coup started at the Kati military base outside of Bamako, and coup leaders said they were responding to the government’s ineffectiveness and corruption in handling the conflict in the north and center of the country. This time, the coup was led by more senior military officers, and given the last three months of protests demanding Keita’s resignation, immediate questions arose around whether the military was working with the opposition.

2. The 2020 coup was preceded by months of nonviolent protests.

The protesters are led by a group of organizations known as the June 5 Movement–Rally of Patriotic Force (M5-RFP), composed of Keita’s political opposition, a network of civil society organizations, and followers of Imam Mahmoud Dicko, the former head of Mali's High Islamic Council. On the surface, the catalyst was the flawed legislative elections held in March. With historically low voter turnout of only 7.5 percent, Malians and international observers viewed the vote as deeply problematic due to COVID-19 and accompanying restrictions on large gatherings, as well as the ongoing violence that forced some polling stations to close. Adding to security concerns, the main political opposition leader, Soumalia Cisse, was kidnapped and has still not been released. The final straw for protesters was when Mali’s Constitutional Court overturned election results for 31 legislative seats.

Keita, commonly as known as IBK, initially deployed security forces to disperse protesters, leading to 11 deaths. But this did not deter the movement and IBK and his government made some concessions after a July 11 demonstration. The president pledged to appoint a new slate of judges to the Constitutional Court, paved the way for partial legislative elections in the constituencies the court overturned results, released members of the political opposition from custody, successfully pressured his son to resign from a powerful parliamentary committee, and said he would consider composing a power-sharing government. Yet the June 5 Movement held strong to its demand that IBK resign, despite these concessions.

3. Previous protests in Mali have led to democratic, but fleeting, change.

Peaceful protests are no novelty in Mali. In 1991, Malians successfully used nonviolent action to end 23 years of one-party rule. The situation in 1991 had similarities to today: the country was in the midst of a Tuareg rebellion in the north, as the economy was contracting due to a wave of IMF austerity programs that hit the middle and lower classes especially hard. What started as a small group of female merchants protesting a specific piece of legislation swelled within three months to include more than 100,000 people throughout the country.

By the end of March 1991, the opposition had organized a nationwide strike, and soldiers refused to fire into crowds and instead joined the demonstrators. As the military defected, then-Lieutenant Colonel Amadou Toumani Touré led a paratrooper unit to arrest the president. Touré then suspended the constitution and called for multi-party elections within two months. The formation of a new government opened a new avenue for peace talks, and the conflict in the north largely died down by 1992 as a result of negotiations between the transitional government and Tuareg separatists.

But the change spurred by the protests in 1991 did not last. Until 2012, Mali was seen as a stable, democratic country in a difficult neighborhood. But after the 2012 coup, democratic norms steadily eroded along with the population’s trust in their government, led by IBK. The government repeatedly postponed elections, with IBK first postponing the 2013 elections citing insecurity in northern and central Mali. While Mali has struggled with election violence, delaying or canceling elections has contributed to the erosion of democratic norms established after Mali’s 1991 protests. Yet demands for democracy have remained strong over the past 20 years.

4. Regional and international efforts to stabilize Mali have focused too much on security, neglecting decades of failed governance.

Efforts within the region to mediate the current crisis have failed. ECOWAS, the West African regional economic community, tried twice to intervene between protesters and the government, but this crisis has exposed the challenge of fostering democratic norms beyond elections. ECOWAS’ leadership is struggling to match the scope and scale of the security challenges in the Sahel. In response to the coup, ECOWAS leaders suspended Mali and announced they want to restore IBK to office. In its peace and security function, ECOWAS has been largely absent in Mali, leaving France, the EU, and the U.S. to fill the vacuum. The G5 Sahel—an ad-hoc regional coalition, comprised of Mauritania, Mali, Niger, Burkina Faso, and Chad, to combat violent extremism—has had difficulty raising money and establishing the necessary structures and capacity to fulfill its mission to address violent extremism in the region.

France, the EU, and the U.S. have provided security assistance to Mali over the past eight years but have not yet developed a diplomatic engagement strategy to navigate this political crisis. While European and American security assistance has focused on helping Malian security forces manage the extremist threat—France currently has 4,500 troops in the Sahel—they have not met the critical and necessary security governance needs, contributing to the current crisis and undermining their legitimacy as mediators.

Since 2012, both the government and international partners, especially France and the EU, have invested in the security services to improve their effectiveness against the extremist insurgency. But these investments have been insufficient in strengthening Malian democratic institutions and the rule of law. Weak democratic institutions and corruption have further eroded Malians’ faith in their government as it struggles to provide basic services.

Mali’s current crisis shows the importance of investing in rule of law and governance in times of peace, and during conflict. Resilient democracies require good governance that cannot be manufactured overnight but must be enshrined in both policy and political norms. It is too difficult to try to construct a social contract when a government is in crisis.

For many Malians, IBK was a symbol of government corruption, of international interference and inaction, of ongoing instability, and of the lack of health care, infrastructure, and education. In short, he has come to represent the failures of governance that has led to huge losses of life, mostly civilians, in Mali. But IBK’s ouster alone will not fix Mali’s profound political, economic, and security challenges.

Despite widespread regional and international condemnation of the coup, many Malians have been celebratory and may not welcome ECOWAS’ efforts to intervene. Although concerns about what may happen next are prevalent, Mali has navigated from military coups to democracy in a timely and largely nonviolent manner twice before (in 1991 and 2012). The coup on August 18 was quick and largely peaceful. The group of military officers who led the coup, calling themselves the National Committee for the Salvation of the People (NCSP), initially pledged to organize elections in nine months, but on August 24 amended that to three years, during which time they would review the foundations of the Malian state and continue coordinating with the various international security deployments in the country.

Although the M5-RFP was not involved in the coup itself and has been careful to keep distance between itself and the NCSP, it has agreed to assist in the transition and organized a celebratory rally attended by thousands of people on August 21. Certainly, the protests contributed to creating an atmosphere in which the members of the NCSP felt confident that they could depose Keita. These movements in Mali, like the 2019 uprisings in Sudan, Algeria, and elsewhere on the continent speak to the transformative power of nonviolent action in Africa. Malians will need to remain persistent in their push for democratic change and regional and international partners can help by eschewing a narrow focus on security and supporting good governance.

After months of public protests, a military coup has toppled Mali’s government. USIP’s Susan Stigant looks at the path forward, saying “there’s a real tension in trying to figure out how to restore that constitutional order without necessarily going back to the status quo prior to the coup.” 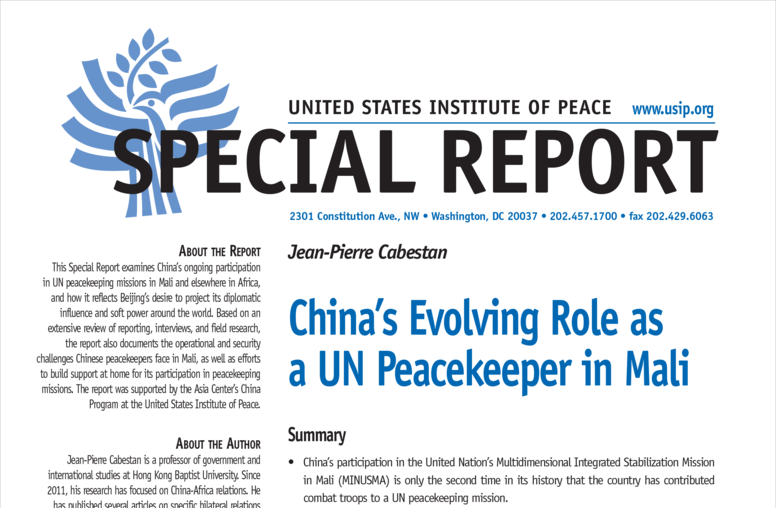 Chinese troops have been stationed in Mali for the last half-decade as part of the UN-mandated stabilization force. Deployed after rebel groups overran large portions northeastern Mali in 2013, it was just the second time Beijing had ever contributed combat troops to a UN peacekeeping mission. This Special Report examines how China is using its peacekeeping activities in Mali as an opportunity to train troops and test equipment in a hostile environment—and as a way of extending its diplomatic reach and soft power in Africa and beyond.