Tunisia’s first-round presidential election was seen as a rebuke of the country’s ruling elite. Did the parliamentary elections follow that same trend and what was turnout like?

It certainly did. This election has swept in a new slate of parties, ideologies, and faces from all walks of life, many of whom have never participated in formal politics. Voters were eager for new leadership, new ideas, and political rhetoric that reflects the values, beliefs, and priorities of the Tunisian public. Many believe this new mosaic of leaders more accurately represents Tunisia’s various political currents, priorities, and belief systems.

Importantly, the success of Qalb Tounes, a new party led by media magnate and presidential candidate Nabil Karoui, can be understood as a rebuke of the austerity regime imposed by recent governments and the failure to deliver meaningful economic reforms that create more equal and just economic opportunity. Likewise, on the other end of the spectrum, leftist parties and parties campaigning on justice, dignity, and anti-corruption also resonated with voters in a big way. Parties representing these values like Tayar Democratie (the Democratic Current) and Harakat el Chaab (the People’s Movement) increased their vote share significantly this time around, indicating that they could become more important players in this next phase of politics. This election also saw a new political grouping emerge called the Dignity Coalition, led by conservative activist and lawyer Saiffedine Makhlouf.

Voter turnout was, in my opinion, surprisingly high given the conditions, at around 41 percent. Globally, voter turnout is down. And Tunisia’s legislative elections were overshadowed, as legislative elections often are, by the presidential election and hampered by a short campaigning period. With voters angry with the established parties and unaware of many of the programs of the newer parties and electoral lists, lower turnout was expected.

This surprisingly high rate of turnout demonstrates that Tunisians are actively engaged in the democratic process and maintain a strong desire to attain the goals of their 2011 uprising: freedom, justice, and dignity. Reconciling various visions of freedom, justice, and dignity, and how they may be attained, will now be the job of this new parliament.

With what we know so far, who is most likely to form a ruling coalition and what would it look like?

This is the key question that everyone is asking because first, it will not be an easy process, and second, the composition of the coalition will determine the course of the country for the next five years.  Unfortunately, it is simply too early to tell.

There is no clear path to a governing coalition. The two parties with the most seats are Ennahda and Qalb Tounes. Qalb Tounes leaders are vehemently anti-Ennahda, making a coalition between them a likely last resort. The next parties in line are either opponents of Qalb Tounes, opponents of Ennahda, opponents of both, or unpredictable newcomers.

If no government is formed within two months, new elections must be held. So, it is conceivable that ultimately Qalb Tounes and Ennahda may be forced to form a government. It is unlikely that any bargains will be made until the results of the presidential election are known later next week. Between now and then parties will begin exploring various alliances and attempting to position themselves for maximum benefit from whatever final coalition is formed. In some cases, this may mean opting to be in the opposition instead.

The makeup of this parliament brings disparate political currents, values, and visions for the country. Forming a majority coalition is only the first challenge. Next will be governing. Some people believe that the “political tourism”—hopping from party to party in exchange for power, positions, or other gains—that characterized the last parliament will be less of feature in this parliament. If true, this may bode well for the chances of serious debate of important issues, a clear legislative agenda, and progress in bringing Tunisia’s laws in line with the 2014 constitution. However, others fear some of the new forces in parliament may promote a more conservative, or a more authoritarian, agenda. But this too remains unclear for now, so we should be careful to avoid overly simplistic or alarmist conclusions until the picture becomes clearer.

How will the results impact the second-round presidential vote on October 13?

It’s hard to say for sure. The two largest forces in parliament, which are still relatively small, are Ennahda, which received 17.5 percent of the vote, and Qalb Tounes, with 15.6 percent. The majority of Tunisians are opposed to both. But examining how voters might seek to balance them in the presidential election is interesting. Qalb Tounes’ candidate Nabil Karoui is one of the two candidates in the second round of the presidential election. The other candidate, Kaïs Saïed, has no political party and thus no immediate power in parliament, although Ennahda has endorsed him.

It is expected that many voters who are strongly opposed to seeing Qalb Tounes gain additional strength will vote for Kais Saïed, or perhaps more accurately against Nabil Karoui. Some voters who oppose Ennahda’s religious politics may also feel uncomfortable with Saïed’s socially conservative viewpoints, while other voters who oppose Ennahda fully support Saïed. So, the picture is complex.

On the other side, we could see some supporters of the previous ruling parties such as Nidaa Tounes and Tahya Tounes put their weight behind Nabil Karoui as they perceive Ennahda and Saïed as a danger to their social and economic interests.

The majority of Tunisians are uncomfortable with both candidates. However, Saïed has recently participated in multiple longform interviews where he has nuanced his positions in a way that has dispelled some of the rumors that he is a Salafist or hardline Islamist. This may help his chances. Meanwhile, Karoui, who has been in jail since late August, has just been freed from pre-trial detention, leaving him three days to campaign freely. This development provides Karoui with a storm of media attention and invigorates his campaign.

Ennahda has endorsed Saïed and their base will likely follow. It is rumored that other parties may also endorse Saïed in the coming days, although the news of Karoui’s release may complicate those calculations as well.

Unlike Saïed, Karoui has a large political party, Qalb Tounes, that finished in second place last Sunday. It is conceivable that Karoui can bargain for support from smaller movements in parliament in exchange for positions in the next government, should Qalb Tounes find itself in the governing coalition. Even if that were to happen, many of these parties and movements do not yet possess the internal discipline or structure to whip their supporters into mass action at the polls in favor of a controversial figure like Karoui.

Lastly, there is the question of how Karoui’s dramatic release from pre-trial detention affects these dynamics. Until now, most analysts felt relatively confident that Saïed would be victorious and recent surveys suggest the same. But there is certainly no guarantee, especially now that Karoui is free.

Importantly, his release is not a ruling on his guilt or innocence, but it may affect public perception toward the latter. Most voters who support Karoui see him as a victim of the state and a man of the people, so this decision may help contribute to that image and could help attract additional voters in the final days of the campaign. His release could also spur opponents to campaign harder in support of Saïed. 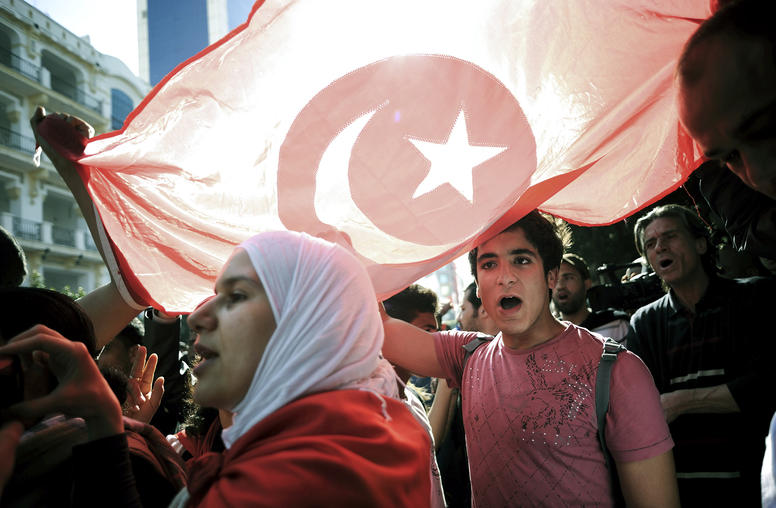 The surprise results of Tunisia’s first-round presidential election gave a clear message to the country’s political establishment: Tunisians want change and they want it now. Neither of the two winning candidates set to face off in the second round have ever held political office nor are affiliated with the political parties that have led Tunisia’s transition. Many of the issues that sparked the uprising eight years ago—like corruption and unemployment—continue to bedevil the North African nation. Yet the first-round vote demonstrates that Tunisians aren’t willing to give up on democracy and want new leaders.