Washington and Tehran have had turbulent relations since the 1979 revolution, but the temperature has risen since President Trump withdrew from the Iran nuclear deal in May 2018 and then re-imposed economic sanctions in November. Tensions rose in April when Trump designated the Islamic Revolutionary Guard Corps as a terrorist organization. Since May, hostilities have escalated with attacks on six foreign tankers and the shooting down of a U.S. surveillance drone. Trump called off a retaliatory strike and instead sanctioned Supreme Leader Ali Khamenei. USIP’s Robin Wright—who directs the Institute’s Iran Primer project—discussed where the crisis stands, and where it could turn.

How have tensions between the U.S. and Iran reached this crisis point?

President Trump had sought a broader accord with Iran that goes beyond the nuclear issue to include Tehran’s missile development, support for militant groups, intervention in Middle East crises and human rights abuses. In April 2019, tensions ratcheted up even more after the administration designated Iran’s Revolutionary Guard Corps [IRGC] as a terrorist group, a first by any U.S. government against the military of any state. It appears to be the turning point for a sequence of military and intelligence operations.

The crisis has three intersecting flashpoints: the core dispute over Iran’s nuclear program; the attacks on six foreign tankers between May 12 and June 13, 2019; and the shooting down of a sophisticated U.S. surveillance drone on June 20. Washington lays full blame on Tehran for the tankers; Tehran has denied its role, despite U.S. footage showing an IRGC patrol boat removing a mine from one of the ships. The United States blames Iran for shooting down a drone over international waters. Tehran claims the Global Hawk was flying over Iranian waters; it retrieved large chunks of the spy plane and put them on display for international media.

On June 24, President Trump took another step in tightening his “maximum pressure” campaign by sanctioning Iran’s supreme leader, Ayatollah Ali Khamenei, and any official in his office. “The Supreme Leader of Iran is one who ultimately is responsible for the hostile conduct of the regime,” the president told reporters after he signed a new executive order. “These measures represent a strong and proportionate response to Iran’s increasingly provocative actions.” 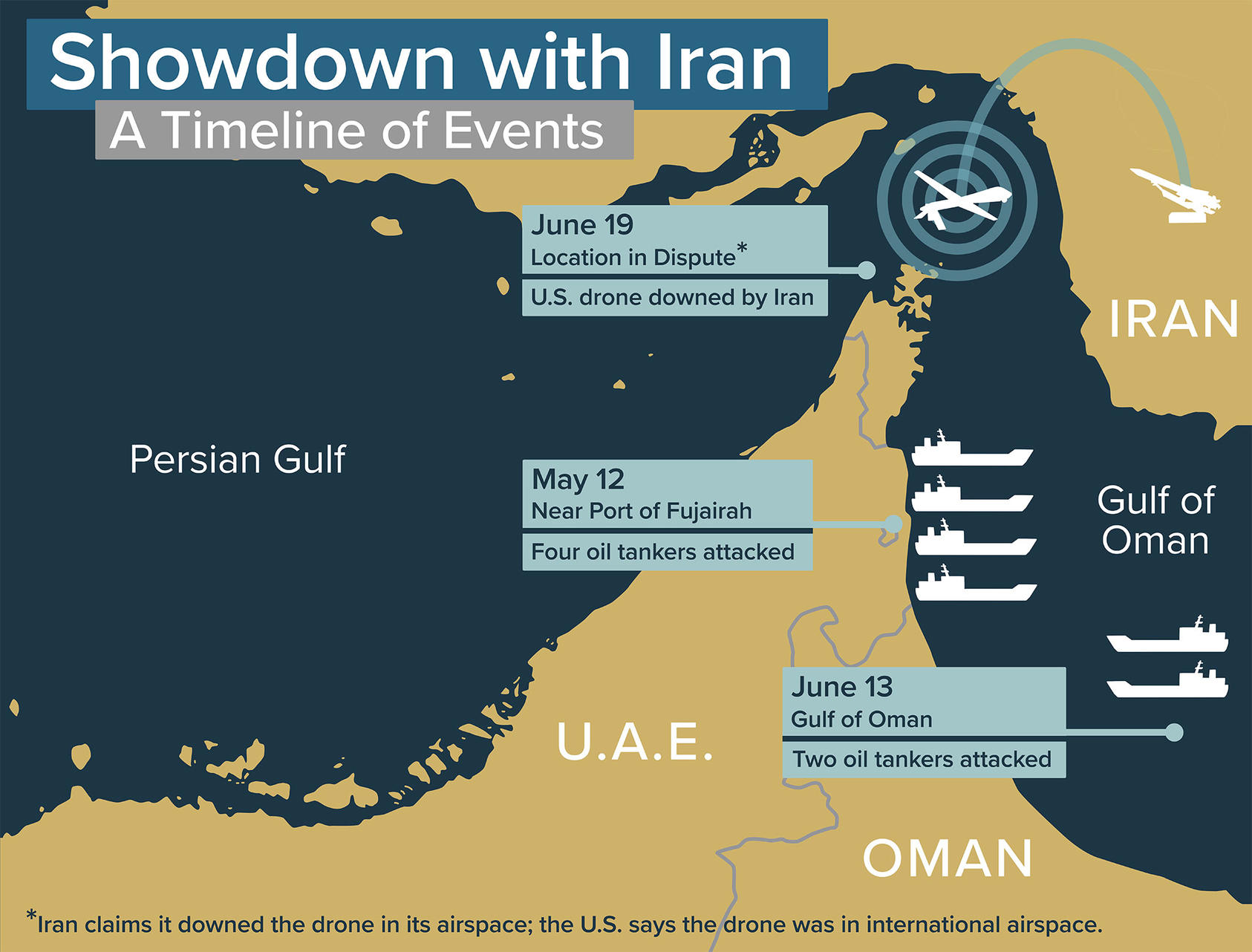 Historically, the United States has sanctioned heads of state, such as Libya’s Moammar Qaddafi, Iraq’s Saddam Hussein and Venezuela’s Nicolas Maduro, when it sought regime change. Trump insisted, however, that the diplomatic door is still open. “I look forward to the day when sanctions can be finally lifted and Iran can become a peaceful, prosperous, and productive nation,” he said. “I look forward to discussing whatever I have to discuss with anybody that wants to speak.” He added, “Who knows what’s going to happen.”

Where is the crisis between the U.S. and Iran headed?

The Trump administration has vowed to impose additional sanctions until Iran agrees to new talks. “The only path forward is for Iran to negotiate a comprehensive deal that addresses the full range of its destabilizing behaviors,” Secretary of State Mike Pompeo said as the latest sanctions were imposed.

Iran’s response has not been hopeful. “Nobody in a clear mind can accept to have a dialogue with somebody that is threatening you with more sanctions. So, as long as this threat is there, there is no way that Iran and the U.S. can start a dialogue,” Iran’s U.N. ambassador, Majid Takht Ravanchi, told reporters before a Security Council session on the crisis. "To ease tensions in the broader Persian Gulf region, the U.S. must stop its military adventurism in our region, as well as its economic war and terrorism against the Iranian people."

On June 25, Iranian Foreign Ministry spokesman Abbas Mousavi tweeted, “Trump’s government is annihilating all the established international mechanisms for keeping peace and security in the world.” President Hassan Rouhani, whose election in 2014 launched the nuclear negotiations, said the latest sanctions against Iran’s supreme leader and foreign minister were “outrageous and idiotic.” In a televised address to Iranians, Rouhani said, “You sanction the foreign minister simultaneously with a request for talks. …The White House is afflicted by mental retardation and does not know what to do.” The Islamic Republic again threatened to take additional steps that would breach the limits on its nuclear program, as imposed in the nuclear deal. It had adhered to the terms in the 14 months since Trump abandoned the accord.

The United States has other options. The U.S. reportedly unleashed a cyberattack on military installations involved in the drone strike. Another option is mobilizing security for tankers sailing in the Persian Gulf through the Strait of Hormuz into the Gulf of Oman and beyond. All six tankers were hit in the Gulf of Oman. The U.S. facilitated similar operations during the Iran-Iraq war in the 1980s. The U.S. and a few European allies provided escorts for reflagged Kuwaiti tankers ferrying Iraq’s oil to the outside world. It did not prevent ships from hitting mines, however. Although it was escorted by three U.S. ships, the Bridgeton, the first tanker escorted through the Persian Gulf, hit a mine in 1987. The U.S. ended up engaging directly with Iran after the U.S.S. Samuel Roberts hit a mine in 1988. The U.S. retaliated by destroyed four Iranian ships and two oil platforms. By mistake, the U.S.S. Vincennes also shot down an Iran Air passenger plane, killing all 290 on board.

President Trump has also put Iran on notice that he is prepared to use military force, even though he called off a planned strike on three Iranian missile and radar sites on June 20. “I think a lot of restraint has been shown by us,” Trump told reporters in the Oval Office on June 24. “A lot of restraint. And that doesn’t mean we’re going to show it in the future.”

In a reflection of how fast the crisis has escalated, President Trump responded to Iran’s angry reaction with new threats the next day. “Sadly, the thing they do understand is Strength and Power,” he said in a tweet. “Iran’s very ignorant and insulting statement, put out today, only shows that they do not understand reality. Any attack by Iran on anything American will be met with great and overwhelming force. In some areas, overwhelming will mean obliteration!”

In his trip to Israel on June 23, National Security Advisor John Bolton warned Iran that it should not mistake U.S. prudence and discretion for weakness. “No one has granted them a hunting license in the Middle East.”

For all the hostility, however, both countries claim they do not want war. “This face-off is not military because there is not going to be any war. Neither we nor them seek war,” Iran’s supreme leader said in May. “They know it will not be in their interest.” And, even as he sanctioned Khamenei, Trump told reporters. “America is a peace-loving nation. We do not seek conflict with Iran or any other country.” The president has repeatedly pledged to pull U.S. troops out of Middle East and South Asian hotspots, notably Iraq, Syria and Afghanistan.

Where does the international community stand?

The gap is deep between the United States and the five other signatories to the 2015 nuclear deal—Britain, China, France, Germany and Russia. The transatlantic divide on Iran is deeper than on any other issue since the end of World War II. At the same time, many foreign companies in allied nations have opted to avoid or pull out of deals with Iran for fear of being sanctioned by the United States. Among them are France’s Total and Germany’s Siemens. Europe has even tried to create a financial institution that would allow companies to trade in humanitarian and non-sanctioned basic necessities, such as medicines, with Iran.

Since tensions escalated in the spring of 2019, several countries have tried to defuse the crisis. Among them are Japan, Switzerland (which represents U.S. interests in Tehran), France, Germany, Iraq and Oman. In early June, Prime Minister Shinzo Abe made the first visit to Tehran by any Japanese leader since the revolution to carry a message from Trump. His meeting with Khamenei coincided with the June 13 attack on a Japanese tanker. Diplomatic overtures by third countries are not over. But, so far, none of them has shown tangible promise.

As the coronavirus pandemic spreads in both countries, USIP’s Sarhang Hamasaeed examines the obstacles facing Iraq’s newly appointed prime minister, as well as whether addressing the crisis might open the door for de-escalation between the U.S. and Iran, saying, “I do hope that these unfortunate challenges still come with some opportunity.”