Nigeria’s federal system gives governors great responsibilities in addressing the issues that are driving conflict and the Boko Haram insurgency. USIP brings together state governors and civic leaders to design and implement inclusive policies that mitigate violence and strengthen community-oriented security. The Institute engages a variety of influential figures, empowers citizens, and uses its expertise and convening power to inform Nigeria policy in the U.S., the region, and around the world. Recent work includes:

The Working Group fosters relationships between citizens, governors, and national and international figures to ensure a diverse array of voices impact decision-making processes. These relationships allow the Working Group to turn expert analysis—such as a recent Special Report that examines changes in political and conflict conditions since 2015—into tangible, actionable recommendations. The analysis from our recent Special Report informed key stakeholders’ strategies for preventing violence throughout the 2019 election season.

USIP’s Justice and Security Dialogue project in Nigeria improves local, state, and national-level institutions’ ability to manage local conflict through supporting dialogues and activities that bring security and justice providers together with communities impacted by violence. The approach promotes mutual understanding, knowledge-sharing, and trust among participants, and results in better informed decision-makers, more effective and accountable security forces, and citizens who are active in the safety of their own community.

Community facilitators trained by USIP are holding dialogues in six states throughout the country. Dialogues focused on preventing election-related violence—including during the post-election transition period—as well as strengthening community-security relationships and other conflicts that facilitators identify as having the potential to lead to violence.

USIP helps governors and state peacebuilding institutions leverage their influence and networks to establish inclusive, cooperative strategies that prevent and resolve violent conflict, ensure policies focus on citizens’ needs, and stem the potential for electoral violence as well as play meaningful roles in the transition process.

USIP conducted research on the transition to civilian-led security and governance in northeast Nigeria and the Lake Chad Basin in the aftermath of the Boko Haram insurgency. USIP experts suggested replacing military forces with police officers—increasing both the size and capacity of the police as part of the process—and creating a formal interagency cooperation mechanism dedicated to community stabilization. In 2019, USIP will convene newly elected and re-elected politicians to discuss the findings and incorporate the recommendations in their security plans.

With USIP’s support, the Centre for Information Technology and Development examined the factors that make certain communities in northeast Nigeria more resistant to violence. The research showed that resilience thrives when there is a robust community platform for active citizen participation and democratic decision-making. 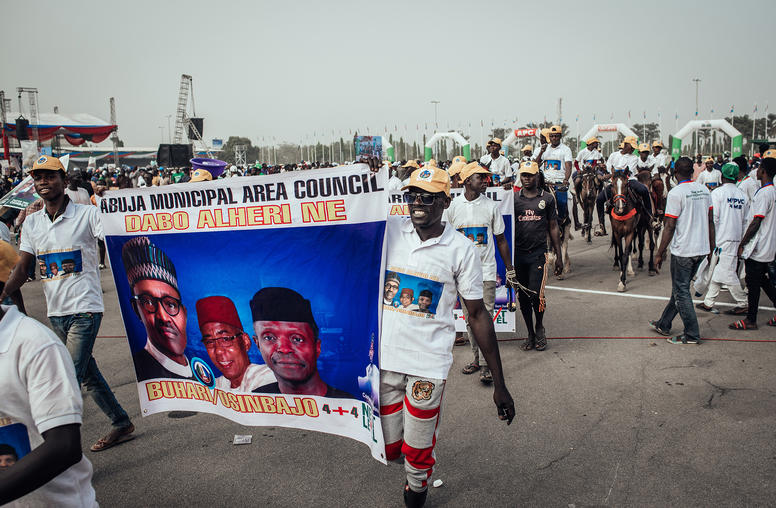 On March 9, Nigerians return to the polls to elect governors and state legislators. The balloting follows the presidential elections held February 23, which saw the incumbent president, Muhammadu Buhari, re-elected for another four-year term. USIP’s Chris Kwaja and Aly Verjee discuss how Buhari’s victory may impact the state elections, Nigerians’ seeming disenchantment with voting, and how to avert potential violence.