On June 30, USIP convened a rich discussion with the AU Commission, AU Mission and African diplomatic corps in Washington, senior U.S. government officials and African artists and activists to explore the critical link between the arts and peacebuilding.

While art, culture, and heritage may not seem directly connected to peacebuilding at first glance, Chioma Agwuegbo, the executive director of TechHerNG, said it’s vital that peacebuilders take into consideration the language, religion and culture of those they seek to engage. Utilizing a community’s art, therefore, is key to understanding their needs and designing effective problem-solving approaches.

Engaging Youth and Women Is Critical

While many studies have revealed that peace processes are more successful when they are inclusive of women and youth — who bear the brunt of conflict — these sectors of society continue to be excluded or ignored in most peacebuilding efforts.

Agwuegbo said policymakers need to be “intentional” in bringing these sectors of society — including women, youth, persons with disabilities and other marginalized groups — into the peace process, and that celebrating expressions of art and identity can be a powerful tool for doing so.

Redefining African Identify and the Explosion of Digital Platforms

Nicholas Songora Odoll, the executive director of Manyatta Youth Entertainment Cbo, said that contemporary African artists and cultural activists are redefining and “enhancing African identity” as they connect with and reflect their communities. While previous generations of artists were heavily influenced by Western art and images, there has been a renewed embrace of an Afro-centric identity. Odoll maintained that this movement has its roots in the activist music of the late Fela Anikulapo Kuti of Nigeria as well as that of Brenda Fassie, Lucky Dube and Yvonne Chaka Chaka of South Africa, among others, who used the arts and their African identity to challenge social issues. Odoll also noted the growing importance of digital streaming and social media platforms, which young Africans have embraced, especially during the COVID-19 pandemic, as alternative forms of messaging.

Sudanese Artists Fueling the Revolution and a Peaceful Transition

Art was used as a “weapon” during the Sudanese 2019 revolution, according to Sudanese artist Assil Diab, who is known professionally as “Sudalove.”

Diab said she was inspired to produce wall murals to honor the young martyrs killed by former President Omar al-Bashir’s regime simply for demanding their basic human rights. The public art she and others produced helped protesters disseminate information and share views on the inclusive and free society they wanted from the transition.

Nureldin Satti, Sudan’s ambassador to the United States, underscored the hope of this new generation of young people in Sudan, noting the murals express the demands of the revolution for “freedom, peace and justice.” Satti noted that art is part of shaping a “shared consciousness” and a “shared vision for the future,” which are essential to support peace processes and the tremendous effort it takes to deliver on  “a culture of peace.” “Art is a unifier and a catalyst,” Satti said, but cautioned that there is a “need to reconcile heritage with modernity to manage diversity and to be able to make culture and heritage tools for peacebuilding and sustainable development.”

Despite the 10th anniversary of South Sudan’s independence this past month, the country is still confronting a grave humanitarian crisis. But South Sudan’s youth are using public art in an attempt to unify the country’s diverse ethnic groups and condemn the endless violence.

Anataban, established in 2017 during a campaign entitled “South Sudan is Watching,” was originally intended as an artistic platform for South Sudanese to monitor the peace talks and be watchful as politicians deliberated on the country’s future.

But today, Anataban (which means “I am tired”) has blossomed into a network for South Sudanese youth, women and other creatives to change the narrative surrounding the country’s long history of failed peace processes.

Co-founder of the Anataban campaign Jacob Bul Bior Bul stressed the importance of art as a means to engage the public in support of peace and development. Through music, dance and art festivals that target women, youth and creatives, Anataban is mobilizing South Sudanese to assert their rights to peace, health care, education, freedom of expression and good governance. And while fighting by armed security forces has largely subsided across South Sudan, there is an alarming increase in deaths from intercommunal clashes. This ongoing violence underscores the continued need for the work of Anataban’s artists as they build community cohesion, resilience and national unity.

The Creative Economy for Peacebuilding

Research has shown that issues in social development, such as unemployment and inequality, are often at the root of conflict and are key areas that impact sustainable development. The challenge for governments remains, in large part, one of limited resources to address these issues.

However, Amira Elfadil Mohammed, the AU commissioner for health, humanitarian affairs and social development, said the creative economy has the potential to drive job creation and sustainable development. Through partnerships with the Africa Exim Import Bank and others, the AU is supporting growth in this area — with the opening of the Great Museum of Africa in Algeria and the Second Biennial of Luanda, a pan-African forum on culture for peace, both scheduled in the coming months.

Regarding the U.S. government’s role in supporting African arts, culture and heritage, Akunna Cook, deputy assistant secretary for African affairs at the State Department, said there is a strong “business case” to invest in the African creative economy and the youth who are driving it to support peace and development.

The U.S. government has long had an advantage in promoting its “soft power” in Africa through the widespread admiration of American culture on the continent and engagement with the huge African diaspora in the United States.

Using these connections as a starting point, the United States is poised to invest in the continent’s creative industries as part of the economic development initiative “Prosper Africa.” The hope, according to Cook, is that U.S. investments will be another source of economic development to create decent jobs for youth and sustainable peace.

Through a continued focus on — and contribution to — the promotion of arts, culture and heritage, Agwuegbo said that the AU, member states, the African people, international organizations and partners can help ensure the creation of an environment that advances community cohesion and resilience; respects diversity, social inclusion, human rights and democracy; and fosters sustainable development and lasting peace. Ultimately, art supports life and peace. 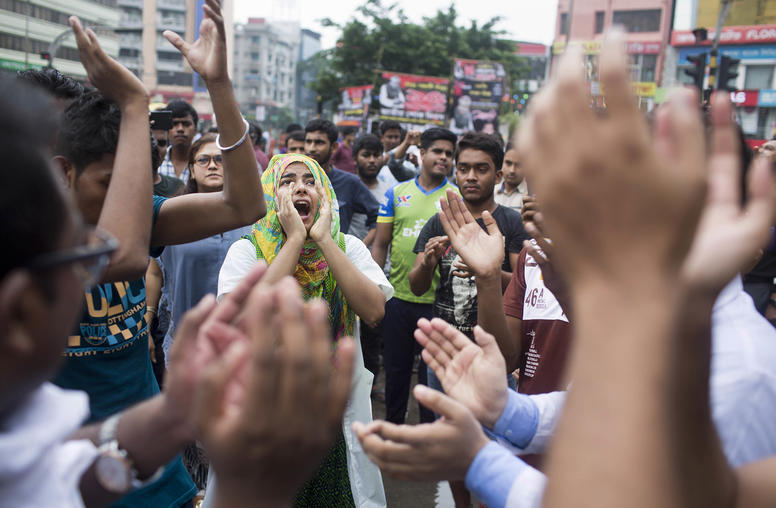