One of the World’s Longest Running Low-Level Conflicts

The U.S. Institute of Peace’s Justice and Security Dialogues (JSD) program convened this gathering to begin to set the foundation for a more stable, trusting relationship between security forces and citizens. The often-overlooked conflict between combatants of the Movement of Democratic Forces in Casamance (MFDC) and the Senegalese army is one of the longest running low-level conflicts in the world. In the nearly 40 years since the MFDC was founded, violence has claimed the lives of over 5,000 people and left another 60,000 displaced as homes, farms, and entire villages were destroyed.

The conflict has cooled in recent years after a tacit cease-fire in 2012 diminished the frequency of politically motivated attacks. Amid this lull in violence, Casamance has been left to sift through the damage. Youth unemployment remains high, and concerns over food scarcity are rising in the mostly agricultural region, as many farms remain inaccessible and environmental changes disrupt crop yields.

So, while attacks from the MFDC have decreased, Abbie Huff-Camara, who coordinates USIP’s JSDs in the region, said that “criminal acts and security threats have been increasingly fuelled by economic motivations, rather than being politically charged,” with citizens facing armed robbery, cattle theft, kidnapping, and arms and drug trafficking.

Meanwhile, strained relations between security forces and civilians have stifled local leaders’ ability to address these issues. With the trust between the government and citizens weakened, many communities have struggled to keep the peace despite efforts to stabilize the local economy.

“The focus has been more on economic development rather than peace,” said Huff-Camara. “But for many community members, there is a sense that the two should go hand in hand, and that in many ways, peace should take priority.”

A Pilot Program in Goudomp

The town of Goudomp, just miles from Senegal’s southern border with Guinea-Bissau, was one of many communities in Casamance struggling with these tensions between citizens and security forces. In 2019, building on a dialogue process launched in 2015 in Guediawaye, on the outskirts of Dakar, local leaders partnered with USIP and Dynamique de Paix en Casamance (DPC) to organize a pilot program for USIP’s Justice and Security Dialogues in the region.

The JSD program, which has been active in Senegal since 2015, has pioneered a method to bring state officials, community leaders, and citizens together to work out the roots of their problems and cooperatively rebuild security in countries in Africa, the Middle East, and Asia. "At this stage, the JSD is building trust between security forces and citizens with dialogues that will have an impact beyond security and touch the lives of community members in Goudomp at many levels,” said Baba Ndiaye, a USIP program officer overseeing the JSD in Casamance.

The first official dialogue in Casamance took place in early March 2020 and left participants feeling hopeful. “I was amazed at the representation at the first dialogue,” Goudomp Mayor Malang Vieux Cissé said in an interview with USIP. “Everyone sitting together …. Generally, we do not have that. For some people, it was the first time.” Souleymane Mané, the head of the Proximity Security Assistance Agency at the departmental level, offered a similar sentiment: “I didn’t have contact with key partners [in the community] before the dialogue.”

From that initial dialogue, community leaders and security forces committed to open communication with one another—rather than seeing one another as adversaries, the two groups pledge to work as partners to solve Goudomp’s communal issues.

Despite its informal nature—there are no official systems in place—just having communication channels in Goudomp has been revelatory for many involved. Sidy Sao, president of the local youth council, said that both he and many other young people “noticed a change … an increase in confidence” after sharing contact information with security actors. “Before the dialogue, I didn’t have any contact with people in positions of power,” said Sao.

Now, Sao says his relationship with security forces has improved to the point where “I notice more and more people are coming to me for information … Both the people of Goudomp and security forces are no longer afraid to approach one another.”

With the coronavirus pandemic now threatening the globe, Goudomp has leaned on this informal communication system to formulate a response—to overall positive results. “Although I cannot quantify the communication or the confidence that I am seeing in the community,” said Mayor Cissé, “I am proud with our response so far.”

The contact-sharing program allowed officials to cancel important cultural celebrations for public health reason without incident or tension. “Sometimes security forces have information that the population doesn’t have,” said Sao. “They should understand and communicate more with us to protect and guarantee our safety … and the dialogues have allowed us to do that.”

In the same vein, among other activities, USIP and DPC helped officials organize a roadshow to demonstrate the importance of security and hygiene measures for Goudomp’s citizens. They wore masks and used hand sanitizer gel, respected social distancing, and stayed in their vehicles, demonstrating to citizens that security forces and officials were following the orders as well.

Additionally, youth leaders such as Sao have begun assisting security forces at the entry and exits to the town. Upon entering Goudomp, cars are stopped, and passengers have their temperature taken and are asked to respect the public health rules put in place to stem the spread of coronavirus.

The response has paid off thus far. Despite confirmed infections in neighboring towns, Goudomp has managed to stave off any coronavirus cases.

Work Still to Be Done—Continuing the JSD

While successful, this newfound collaboration cannot prevent tensions from rising entirely. But even when they do arise, the informal communications channel has helped ease them with minimal conflict.

In early May, two people were beaten for violating Goudomp’s curfew—one of them a pregnant woman who was taken to the hospital. Initially, there was no indication of who the attackers were, but some suspected nonuniformed members of the local gendarmerie. “Young people approached me wanting to protest,” said Sao. “But I believed the best thing was to go to authorities and discuss with them.”

After meeting with Mayor Cissé and district prefects, both Sao and Cissé decided they did not have enough information and sought out local security forces, who offered to help investigate the attack. Eventually, a press briefing was organized to condemn this incident and insecurity in Goudomp. “Those steps we took, we were able to do that because of the dynamic established in the dialogue. Neither side reacted without information,” said Sao.

Mané has also noticed important changes. “More people are coming to me with information [on security matters]. This is very important because my job is to collect this intelligence … I’m thankful for the JSD process.”

While the planned follow-up to March’s dialogue has been delayed amid health concerns, USIP and DPC have been in consistent contact with participants, lending support and advising them on the coronavirus outbreak through WhatsApp and other virtual platforms. “Important steps remain in this process,” said Ndiaye, “but we’re seeing opportunities for a more secure community and to keep that impetus toward collaboration.” Those who were involved in the first dialogue have made clear they want them to continue, as well. “There is good communication, but no system in place,” said Mayor Cissé. “It’s been mentioned before, and it could be a good thing for USIP and DPC to support.”

Sierra Leone, Senegal, Malawi and Cape Verde all have... 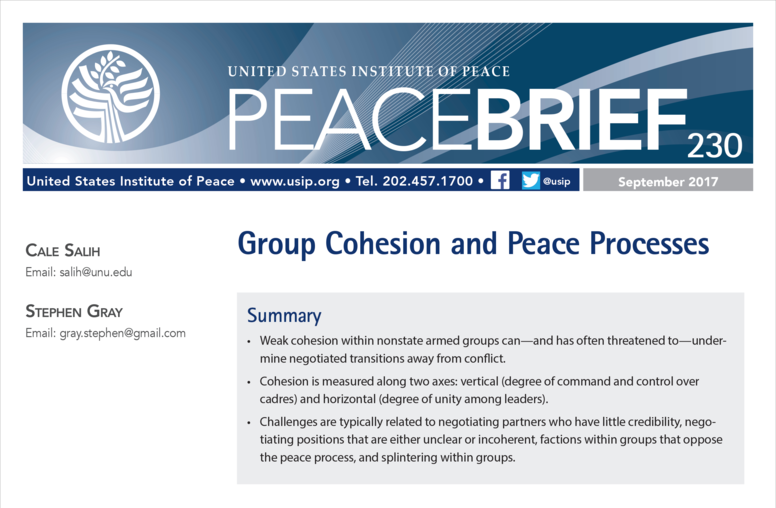