In Pakistan’s 2018 general elections, the male-female gap in voter turnout stood at 9.1 percent with 11 million fewer women exercising their right to vote than men. It is generally assumed that a high gender gap in turnout is due to communal customs in rural constituencies and that in metropolitan areas local elites and political actors rarely suppress female voting. Through our research, however, we found a larger gap in metropolitan cities than in rural constituencies.

Looking at turnout data from 2018, there is a much higher gap in the largest metropolitan cities compared to each province’s remaining constituencies. The difference between the largest metropolitan city and the rest of the province is highest in Punjab, with the gender gap in turnout in Lahore being double (12.5%) that in the rest of the province (6.3%). 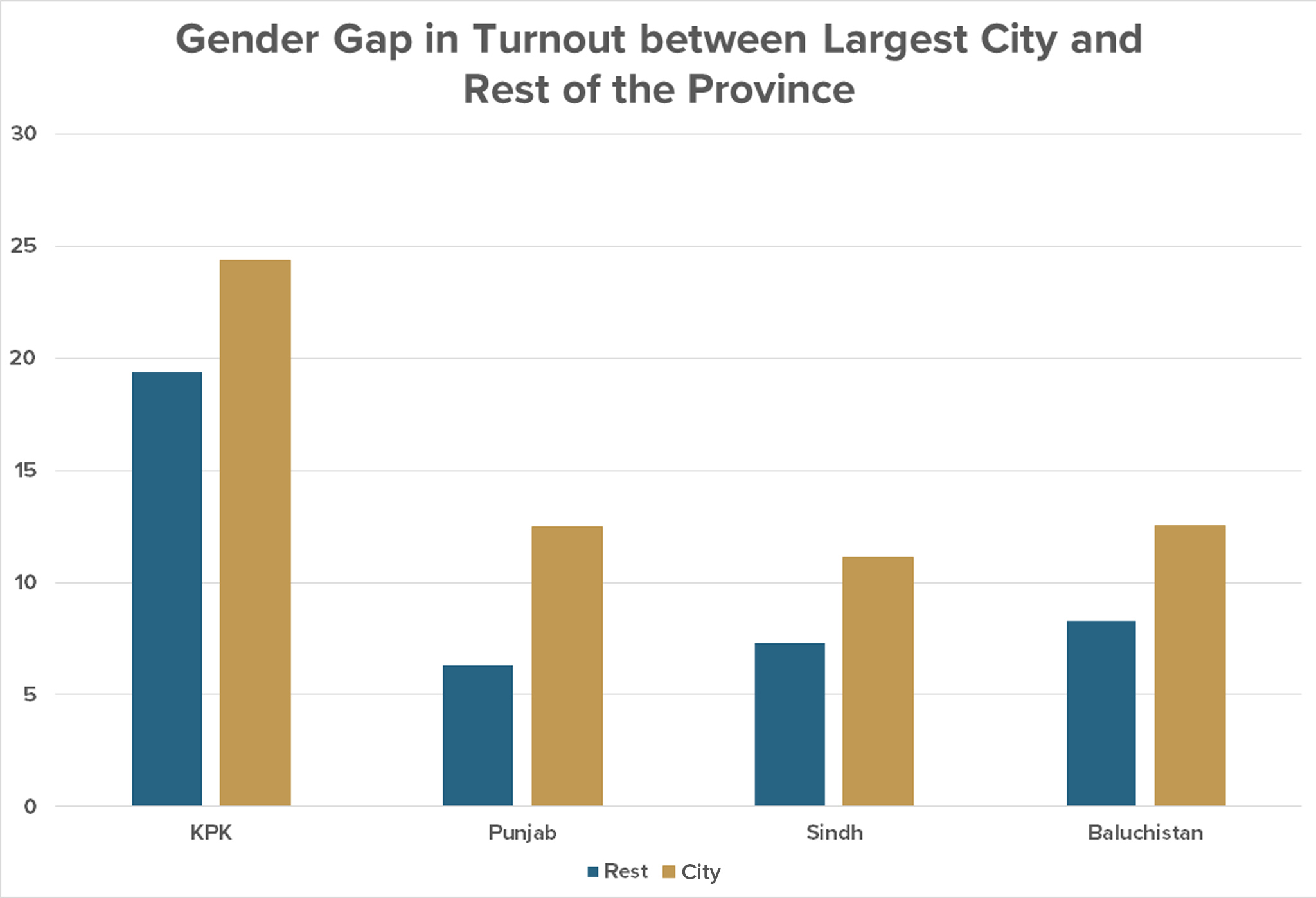 This disparity between cities and rural communities is particularly important because population growth in Pakistan’s larger cities is significantly greater than in the rest of the country. Women are an important constituency for the provision of clean drinking water and curbing inflation with 18.3 percent and 16.1 percent respectively citing these as the most important public policy issues in the run up to the 2018 election, compared to 9.2 percent and 9 percent of men in the sample. This suggests that it is critical that the gender gap in participation is addressed so that women’s concerns are addressed by their elected leaders.

Unfortunately, of the 46 million women that are registered to vote in Pakistan, only 40 percent participated in the 2018 elections. Women face a number of barriers to greater political participation, both societal (e.g., traditional views on a woman’s place in society) and bureaucratic (e.g., lack of access to national identity cards that give women an official record within the system).

These barriers remain despite concerted efforts by the Election Commission of Pakistan (ECP) to register female voters by providing opportunities to obtain their national identity cards in the lead up to the 2018 elections. Additionally, changes to the election law empowered the ECP to void the results in any constituency where the female voter turnout is less than 10 percent of the women on the voter rolls. Nevertheless, the gender gap in electoral turnout remained stark in the 2018 elections.

What Explains the Gender Gap in Metropolitan Pakistan?

We address this question using an original survey of 2,500 randomly selected households in Lahore, Pakistan’s second largest city with a population of 11 million. Our results show that the gender gap in metropolitan cities is related to patriarchal norms in the household and individual women’s knowledge of politics and the electoral process. Poor knowledge goes hand in hand with women’s low interest in politics, which is unsurprising in a context in which political parties fail to directly engage women and address their issues.

Patriarchal norms: We found that the most important household factor determining women’s participation is men’s views about women’s political engagement and the conditions under which they think it is appropriate for women to vote.

This suggests that men remain important gatekeepers in mediating women’s ability to vote and that individual attitudes and social norms upheld by men are an important determinant of women’s turnout in metropolitan cities. This gatekeeping works not through coercion but through the need for women to seek permission from men, and some permissions are more easily granted than others: “Mostly elderly women go out and vote, very few young women go out and vote because a lot of younger women don’t get permission to go,” explained one of our male respondents. This echoed other respondents’ remarks, noting that both security concerns and household work affected younger women’s political participation more than it did older women.

Political knowledge and the mobilization gap: A key determinant of women’s turnout in the 2018 elections was knowledge of politics, elections, and the voting process. Our research shows that the more knowledge women have of the electoral process and of politics in general, the more likely they are to participate at the polls.

Poor political knowledge among women is strongly correlated with low levels of interest in politics and that, in turn, has a strong association with the low contact between political parties and women voters. A common refrain heard from women in our focus groups is that they feel that they are invisible to political parties and that their issues did not matter. As one respondent put it: “Most political party members and workers talk to the men in our families and do not attempt to engage with us. We would appreciate it if someone made an effort to communicate with us women, and if we find some merit in what they are saying, we will support them regardless of the political party.”