Dressed in black and white to represent both lamentation and hope, and clutching red roses, 300 women from all religions and tribes in the multi-ethnic state of Plateau in northern Nigeria gathered in the streets of the state capital of Jos. Together they marched to the governor's office to deliver a communique and a stern message: the government of Nigeria must take a more committed, effective and proactive approach to rescuing the girls captured in northern Nigeria and also in combatting Boko Haram, the extremist group that is holding the girls.

"We wanted to increase the pressure on [President Goodluck] Jonathan to do something about the girls," explained Pastor Esther Ibanga, one of the organizers of the May 8 rally and president of the Women without Walls Initiative in Jos. Ibanga is a participant in USIP's Women Preventing Extremist Violence program. 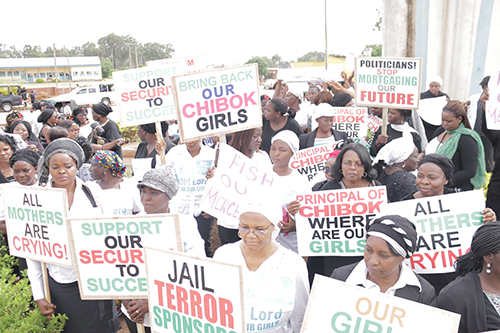 The women who demonstrated are united under the banner of "Plateau Women Solidarity Movement," and they’re working with other women-led advocacy movements in Abuja and across Nigeria. The kidnapping of the girls has galvanized both Christian and Muslim women across the country, and mobilized a public-awareness campaign on Twitter with the slogan, or hashtag, #BringBackOurGirls, an appeal that even U.S. First Lady Michelle Obama endorsed.

The Plateau women have crossed other traditional lines as well. In planning the rally, they worked in close coordination with the Nigerian state police command. The police provided a protective corridor for the women's march, and in addition to carrying signs denouncing the kidnappings, the women also hoisted placards that read "support security to do its job."

"The military strategy to combat terrorism needs to step into the 21st century," says Ibanga, "and the government needs to focus on preventing violent attacks, not reacting to them."

Security begins on the community level, but relationships between police and communities are often strained in Nigeria, polarized by a history of police corruption and abuse.  Women in particular often have no trust in law enforcement and security services. The women in Jos, however, have demonstrated a concerted effort to improve this dynamic. This example of police-community cooperation in the march comes from years of strategic relationship building.

Ibanga's outreach to the police began over seven years ago, after a very violent period in the Plateau's history of sectarian conflict. In her capacity as a religious leader, she organized her church members to create T- shirts for the local police officers that read "100% Nigerian. No corruption. No greed." Many of the officers wore them under their uniforms, and the initiative helped open channels for communication.

Among the demands read to the governor last week was a plea for the government to set up trauma counseling centers for Nigerians affected by violence and terrorism, especially for children. The experience of and exposure to violence is understood to be a contributing factor to radicalization in Nigeria, and many are vulnerable to being trapped in this cycle.

Watching the recently released video of the girls, in which they are crouched in a camp in the forest dressed in black hijabs and chanting Koranic verses, Ibanga shakes her head as one of the girls, her faced blurred to hide her identity, is forced to speak into a microphone.

"You can hear the trauma in her voice," Ibanga observes. "When the girls are returned, it will take years and much community support to rehabilitate them to help them recover from this heinous experience."

Georgia Holmer is a senior program officer in USIP’s Center for Gender and Peacebuilding.

U.S. Institute of Peace Nominations Are Open for the 2022 Women Building Peace Award