Nine years after the fall of Muammar Qaddafi, Libya continues to struggle to end its violent conflict and build state institutions. External actors have exacerbated Libya’s problems by funneling money and weapons to proxies that have put personal interests above those of the Libyan people. U.N. efforts to broker a lasting peace have not yet succeeded, overshadowed by competing peace conferences sponsored by various foreign governments. Meanwhile, Libya’s borders remain porous, particularly in the southern Fezzan, facilitating an increase in trafficking and smuggling of illicit materials, including weapons.

At the subnational level, many local conflicts reflect long-standing feuds between various factions, tribes, and ethnic groups. Though Libya’s national conflict has stalled in recent months, prospects for a political solution are complicated by the country’s deep political and tribal divides.

Since 2011, USIP’s approach in Libya has focused on building a strong local infrastructure for peace, strengthening the capacity of key constituencies such as youth and women, and facilitating local dialogues between groups in conflict. These local institutions will be crucial to the success of any eventual transitional justice effort, creating a constructive platform to address grievances and reduce polarization and violence. USIP’s work is meant to empower Libyans with the tools necessary to contribute to a sustainable peace.

USIP partnered with key community actors and civic leaders from Sebha, Ubari, and Nalut-Siyaan from 2018-2020 to convene local dialogues on transitional justice and conflict resolution. In 2020 and 2021, USIP will support these individuals, in partnership with international organizations such as the World Food Programme, as they implement post-dialogue activities intended to build community trust and to strengthen social cohesion. These local dialogues are laying the groundwork for an expected transitional justice process, and USIP is actively seeking to support other critical aspects of the process.

Strengthening the Security Sector and Rule of Law

The increasing presence of nonstate armed groups and their cooptation of traditional security services has resulted in inconsistent—and sometimes inhumane—law enforcement practices and treatment of inmates in correctional facilities. Libya’s dilapidated prisons are incubators for radicalization and extremist recruitment and also allow nonstate armed groups to engage in self-interested and predatory practices.

projects promote the rule of law and the constructive involvement of local communities in security issues. These projects evaluate the criminal justice sector, strengthen capacities of justice officials to implement reforms, and develop collaborative problem-solving. In July 2020, USIP launched a new project that will conduct research to fill existing knowledge gaps on correctional facilities in Libya and the criminal justice system in the Fezzan region. This project aims to strengthen the rule of law in Libya by providing the international community and Libyan officials with a more complete picture of the region’s institutions, as well as actionable recommendations to make critical reforms and to inform the development and implementation of future policy and programming.

USIP is improving the conflict analysis and prevention skills of youth across the country through youth-led projects intended to prevent recruitment by extremist groups. In Ubari, USIP seeded an organization called “I Am a Volunteer,” focused on reconciliation and collaboration between tribes. In Brak Al-Shati, a youth leader, with the support of USIP, successfully advocated for the addition of a youth representative on the municipal council. Alwaan, a Facebook page with almost 50,000 followers, chronicles these success stories and inspires other Libyan youth. In 2021, USIP will convene decision makers and youth in dialogue around pressing issues in eastern Libya.

USIP works with local and international partners to produce unique, timely, and policy-relevant research. USIP previously partnered with UNDP to ensure their Stabilization Facility for Libya project in Sebha was sensitive to local conflict dynamics; the Institute is now working on the same project in Ubari. To date, USIP has produced reports covering: the state of prisons and detention, the significance of tribal authorities and their role in justice and security, the prospects of elections, the secure release of sensitive detainees, and drug trafficking and use, among others. Future research will focus on juvenile detention, conflict dynamics around Libya’s borders, and issues facing youth in southern Libya. 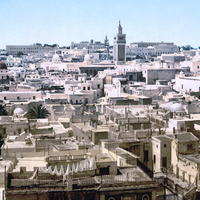 USIP’s regional office in Tunis oversees the implementation of programs, convenes experts, conducts trainings, and facilitates USIP’s regional efforts. The office works with local, national, and international partners to reduce and prevent violent conflict in the Middle East and North Africa, including on-the-ground in Libya with local staff.