In 1967, America was racing the Soviet Union into space, debating war in Vietnam and dancing to Aretha Franklin’s “Respect.” John Lancaster graduated that spring from the University of Notre Dame. Having studied on a Navy ROTC scholarship, he took a commission in the Marine Corps. After several more months of training, Second Lieutenant Lancaster landed at Da Nang airport amid the Vietnam War’s bloodiest battle: the 1968 Tet Offensive by the North Vietnamese and Viet Cong forces.

In response to Tet, the military was rushing new forces into combat, including a shipload of Marines who had been conducting goodwill exercises around Asia. “I had been in-country all of 10 days and I was assigned a platoon of guys from the 1/27 Marines. Most of them were 18-year-olds; I was 23.” Lancaster issued his troops new M16 rifles and soon led them into a flat landscape of rice paddies, canals and mostly abandoned villages near the city of Huế.

Dug into farmland on a dark night, Lancaster’s troops heard first a shrill blast of whistles as a large force of North Vietnamese attacked. “They came running in with guns blazing, throwing satchel charges and grenades,” Lancaster recalled in an interview. “They got inside us real quick because they were willing to take the casualties.” The battle raged for hours. Amid smoke, muzzle flashes and explosions, Lancaster heard injured Marines call for help and leapt up. In a sprint to the Marines’ foxhole, Lancaster “came face-to-face with an enemy soldier,” another Marine wrote. Before Lancaster could aim his rifle, the North Vietnamese soldier fired.

A bullet tore through Lancaster’s chest, ripping holes in both lungs. Another shattered his spine. Minutes later, Marines dragged Lancaster out of gunfire and “a really good corpsman figured out which lung he could plug up,” Lancaster recalled. “He rolled me onto my side to let me breathe, gave me something to hold onto and warned me that to survive I had to resist the shock, stay conscious and not let myself roll onto my back.”

In five hours of chaos, Lancaster’s platoon of 32 suffered four Marines killed and 18 wounded. One of the dead, Lancaster said, was “a guy I had wanted to leave in the rear; he had only a week left before he was due to return home to his wife and two kids.”

Just five days later, U.S. and North Vietnamese diplomats would hold their first meeting in the Paris peace talks to end the war. John would spend months in hospitals, returning to America with the Purple Heart, the Bronze Star and a life to rebuild. “I lost a lot of really good Marines. … It took me a while to get over that day, I’ll tell you, and to get my life back together.”

Lancaster’s next battle would last not hours, but decades. He decided to follow his father’s career path as a lawyer and applied to Notre Dame’s law school. In his interview with the two senior deans, “it was clear that they didn’t want to take me,” Lancaster said. “I’ll never forget Dean Fascio looking right at me and saying, ‘John, you don’t understand. We’re literally out of seats this year in the first-year class.’ And I said, from my wheelchair, ‘Not to worry, dean, I’ll bring my own.’ Then he asked, ‘How are you going to get up the steps into the building?’ And I said, ‘the same way I got in for this interview. I’m gonna corner a couple of beefy students and ask them to pull me up.” He added: “By the way I notice there are plans for a new wing on the law school and I fully expect it will be completely accessible to people with disabilities under the recently passed standards of the Architectural Barriers Act of 1968.” The deans let him in.

Over years, potential employers dismissed John’s ambition as though reading from a script: “How can you deal with the courthouse steps?” “The law library stacks are too narrow for you; how will you do research?” Or simply, “We don’t think you’ll have the stamina to work in our office.” Finally, Lancaster won his first legal job at the Veterans Administration, “poring over case files in a in a gray office with other guys wearing gray suits and gray complexions.”

So when a prominent disability rights campaigner, Judith Heumann, and another Marine vet, James Maye, rolled their wheelchairs into his office one day, Lancaster seized on their invitation to join the movement as a lawyer for the Paralyzed Veterans of America. “They were building a network of people with disabilities to take on big, basic issues like access to jobs and transportation,” he said. The work would include battling the too-automatic institutionalization of people, notably with developmental and health disabilities. “I toured some pretty ugly facilities in that job,” and “I met a whole bunch of veterans who had paid a high price for war.”

That, plus some work representing indigent prisoners at Washington, DC’s jail, fueled Lancaster’s mission. Over seven years he drafted and helped implement Maryland state laws protecting legal rights of people with disabilities. He then moved to the center of the nation’s disability rights revolution. Under the George H.W. Bush and Clinton administrations, Lancaster worked in a small White House office to help Americans understand and implement the 1990 Americans With Disabilities Act—the landmark law that prohibited discrimination in employment and public accommodations against people with disabilities. “We toured all 50 states, explaining the law to the business community, to vocational rehabilitation services and to people with disabilities,” Lancaster said. In each city, “we would hold a big reception to bring everybody together. It was amazing how often the head of the state vocational rehabilitation agency had never even met the head of the chamber of commerce. There was an amazing disconnect between those preparing people with disabilities for the world of work and those who had the jobs!”

Then one day, a quarter-century after Lancaster took a couple of North Vietnamese bullets in a rice paddy, a Vietnamese-American man “just showed up in my office.” Ca Van Tran explained that he was building a campaign to help Vietnamese disabled in the war. “I hear you’re a Vietnam veteran,” Tran said. He asked: Would John help the men he once fought?

Lancaster won backing from U.S. officials and made several trips to help Tran advocate for disabled Vietnamese. Soon, he moved from his White House job to a city whose very name had once been an American epithet for evil: Hanoi. Through a nonprofit organization, Vietnam Assistance for the Handicapped, Lancaster spent nearly five years working in support of men whom war had once defined as his enemies.

“One of my best friends in Vietnam is a disabled North Vietnamese army vet who heads, no kidding, the ‘Disabled Veterans Sports and Singing Club’ in Hanoi,” said Lancaster. “When they weren’t playing wheelchair basketball or tennis, they were a choir performing Vietnamese patriotic and folk songs. … Manh Tuan had a motorbike that had been adapted into a three-wheeler with a platform on the back big enough for me to ride along. So we would go around the city together on his motorbike.” Manh Tuan was disabled “the same way I was—with a bullet in the spine”—and in the same place, fighting for those rice paddies east of Hue in May 1968. “We figured out that we never personally fought against one another,” Lancaster said, “but we were injured doing exactly the same thing for opposing sides.”

“The Vietnamese government was pretty good at making positive changes,” Lancaster said. “They recognize how widespread disabilities are in Vietnam from what they call ‘The American War.’ We spent time in three-quarters of Vietnam’s provinces. And what is most horrific is the new casualties and disabilities being inflicted on innocents.” Monitoring organizations have counted more than 100,000 Vietnamese killed, disabled or hurt since the war’s end by tons of unexploded bombs and shells decaying in Vietnam’s soils and waters. The Vietnamese Red Cross estimates that 3 million of the country’s people, including 150,000 children suffer cancers, birth defects or other disabling ills from the poisonous defoliant Agent Orange.

Veterans and the Costs of War

On Veterans Day, what meaning should we take from a story like John Lancaster’s story? Partly, it’s an answer to the question “What are the costs of war?”

Economists, neurologists, demographers and others dig ever deeper to answer that question with data. Research from Brown University’s Costs of War project, Australia’s Institute for Economics and Peace and the Carnegie Commission’s Costs of Conflict has deepened the evidence for what Lancaster tells us from experience: Whatever we may we see and understand of war’s costs is a fraction of the reality.

Too, Lancaster’s story is a reminder that some of our most committed peacebuilders are warfighters. When Americans campaigned decades ago to establish a specialized “institute of peace” to strengthen our nation’s ability to prevent wars, combat veterans led that movement. They included senators (and World War II lieutenants) Mark Hatfield of Oregon and Spark Matsunaga of Hawaii. A leader at the grass roots was former Navy ensign Mike Mapes, who had witnessed nuclear war at Nagasaki.

Lancaster helps oversee USIP’s work as a member of its Board of Directors—a role that he says helps him close a circle. Like the many other war veterans among the Institute’s staff and partners, Lancaster labors to prevent violence because he knows, better than most people, its costs. Also like USIP, Lancaster works with the certainty that—even where the violence has been brutal and the trauma deep—reconciliation and peace are always possible. 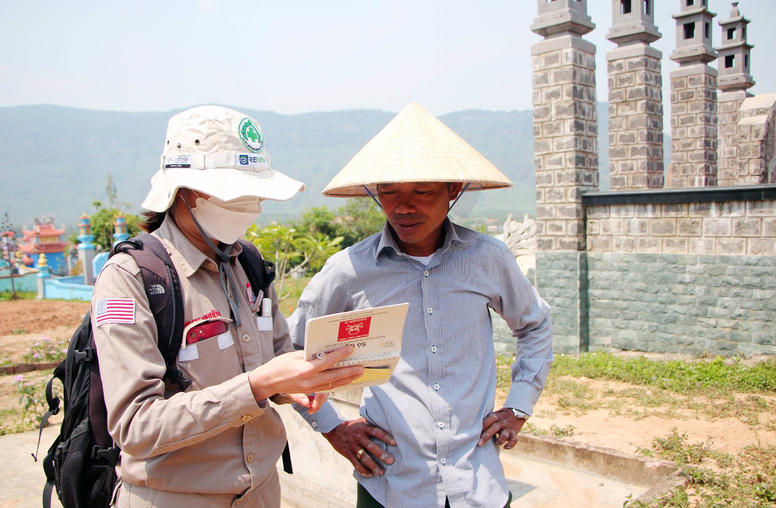 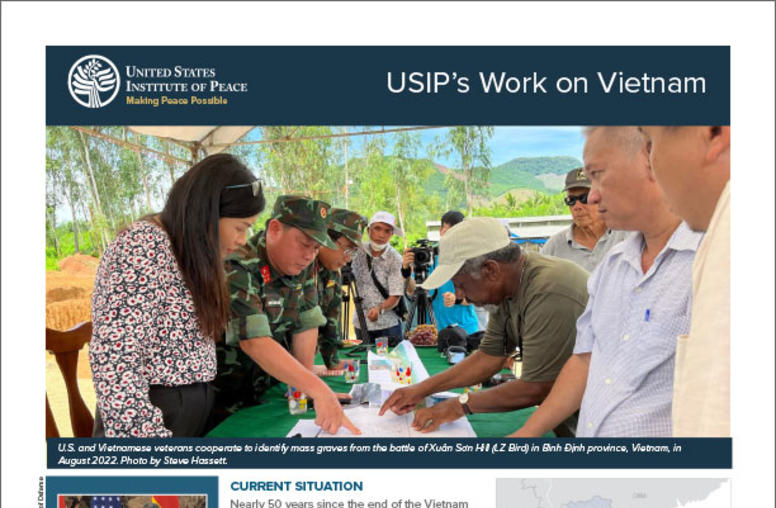 Nearly 50 years since the end of the Vietnam War, and more than a quarter century since the normalization of U.S.-Vietnam relations, Vietnam is emerging as a rising power at the heart of the Indo-Pacific region and an increasingly important U.S. partner. Once one of the world’s poorest and most isolated countries, Vietnam is now a middle-income country with a dynamic, young population and a promising future.