Feingold, a former U.S. senator from Wisconsin who served on the Senate's Africa subcommittee for 18 years, pointed to recent developments that have helped reduce violence in the DRC. Conflict there has resulted in the death or displacement of more than five million people, making it the deadliest war in Africa's modern history. The conflict has also produced mass sexual violence, the conscription of children into armed militias and other mass humanitarian problems.

The progress Feingold referred to includes the signing one year ago of a Peace, Security and Cooperation Framework for the DRC and the region by 11 African countries. The pact represents the most comprehensive effort to date to deal with root causes of conflict and end the cycles of violence that are concentrated in the eastern DRC but have connections to several countries of the region.

The Framework calls for DRC reforms in the security sector, the economy and government decentralization, as well as reconciliation efforts and extending state authority in the east. It also calls for neighboring countries to respect the sovereignty of others, to neither tolerate nor provide assistance to armed groups and to not harbor people accused of war crimes or crimes against humanity. From the international community, it asks for deeper engagement by the U.N. Security Council, appointment of a U.N. special envoy, a review of the U.N. mission in the DRC and support for economic integration in the region.

U.N. Secretary-General Ban Ki-moon followed up with the appointment of former Irish President Mary Robinson as his special envoy. And in July of last year, Feingold was appointed as the U.S. special envoy. In taking the job, Feingold said, he was impressed that "the international community was showing it wasn't going to tolerate this [humanitarian and security crisis] anymore."

In his remarks at the Institute, Feingold also cited other signs of progress: a World Bank pledge of $1 billion for health, education and other services in the DRC; the Security Council's authorization of an intervention brigade that has conducted offensive military operations against a significant rebel group called M23; and the passage of a promising amnesty law in the DRC that envisions accountability for war crimes suspects and amnesty for ordinary fighters who are willing to lay down their arms. 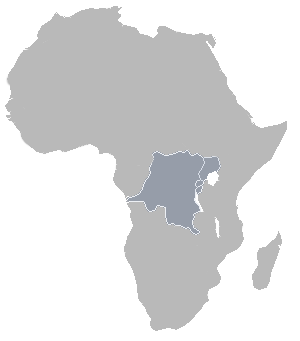 ​Feingold said that U.S. and international pressure on Rwanda to stop support for M23 "made a difference" in its willingness to abandon its fight in the DRC. He said his diplomatic work with regional leaders aims "to create confidence-building between these countries" to strengthen peace efforts.

Continued instability in the DRC, he said, would also create a potential space for extremist groups to operate. "Failing states are golden opportunities for those who want to do damage to the United States," Feingold said. He elaborated on the point in response to a later question from the audience. "We haven't been quick enough to take terrorist threats in Africa seriously. We have to get our heads around it."

Africa's Great Lakes region includes the nations of Burundi, Rwanda, Uganda and the DRC. USIP Senior Advisor Johnnie Carson, a former assistant secretary of state for African affairs, called it "one of the continent's most troubled and unsettled regions in the past two decades"—an agriculturally rich area that has been tragically devolving into "a permanent battleground."

Carson said the appointments of Robinson and Feingold have "already made a difference" in strengthening regional and DRC peace efforts and given focus to the stepped-up international engagement.

Feingold described regional origins of fighting in the eastern DRC, including the destabilizing in-flow of Hutus from the Rwandan genocide 20 years ago, and the presence of dozens of armed groups, some of which have received support from neighboring countries and eroded DRC authority over the region. He called the eastern Congo an "incredibly complex Rubik's Cube situation."

The DRC has been preparing an electoral road map and recently approved an amnesty law that distinguishes between alleged war criminals, who would be subject to prosecution, and rank-and-file fighters whose surrender or desertion from armed groups would not prompt criminal charges. It also agreed to disarmament, demobilization and reintegration (DDR) efforts for ex-combatants of the M23 rebel group, which signed a peace agreement with the DRC in December. The DDR work is supposed to involve M23 members not only in the DRC but in Rwanda and Uganda as well, according to the U.N.'s DRC mission.

Feingold said implementation of DDR remains "an open question," adding, "This is the moment when these things have to occur." He said that DDR programs need to be "credible" to persuade ex-fighters to surrender or desert their militias.

He also praised the new DRC amnesty law. Past agreements were flawed in seeking to integrate entire rebel groups, with their leaders left in place, Feingold said. "This cycle [of impunity] has to end," he said.

The special envoy also urged DRC military reforms, including efforts to prevent human rights abuses, along with further work to prepare for democratic elections. Saying he shared the view of U.N. Special Envoy Robinson, Feingold expressed concern that "certain key aspects of the Framework haven't been implemented in the way they should."

He added, "There's a significant onus on them, but there's also an onus on us in the international community."