The elected presidents of four Francophone countries in West Africa, appearing at the United States Institute of Peace (USIP) on July 28, called for consolidating democratic advances in their countries after what for most has been a debilitating period of conflict, dictatorship and political struggle.

The elected presidents of four Francophone countries in West Africa, appearing at the United States Institute of Peace (USIP) on July 28, called for consolidating democratic advances in their countries after what for most has been a debilitating period of conflict, dictatorship and political struggle. The event, “Assessing Progress Toward Democracy in Francophone Africa,” is the first time that USIP has hosted four heads of state at one time.

The four leaders said they face a long campaign to bolster democracy and the political culture that supports it, the rule of law, economic development and internal security. “Democracy is a journey. You never reach your destination. The main thing is to keep making progress,” said Boni Yayi, president of Benin. Benin, unlike the other three West African nations represented, has maintained a democratic tradition for two decades. Yet all four are contending with entrenched poverty and complicated internal politics, including hardened opposition movements, some of which are linked to political violence. Some of the election results were also disputed.

A day after their USIP remarks, the African presidents spoke with President Barack Obama at the White House, a meeting intended to underscore U.S. support for the continent’s emerging democracies. “I emphasized that the United States has been and will continue to be a stalwart partner with them in this process of democratization and development,” President Obama said. “I’ve said before and I think they all agree, Africa does not need strong men; Africa needs strong institutions.” He also said of his visitors, “They’ve shown extraordinary persistence in wanting to promote democracy in their countries despite significant risks to their own personal safety and despite enormous challenges.”

At the USIP event, the African leaders welcomed the high-level American support for their democratic ambitions. “This is a very strong message he [President Obama] sent to invite the four presidents who were elected in democratic elections,” said Alassane Ouattara, the president of Cote d’Ivoire. Ouattara himself was elected last November, but he was not able to take office until this May after a French-led United Nations military intervention ended a standoff brought on by the previous president’s refusal to cede power.

All four used their visit to the Institute to discuss what they characterize as the centrality of democracy to their countries’ futures, including to shoring up a host of security problems and tackling underdevelopment.

Boni Yayi, President of Benin: Yayi, an economist and former head of the West African Development Bank, was re-elected in March to a second five-year term as president of Benin. “The people of Benin have decided to address these problems through democracy. This is a wind that no one can stop,” he said. Yayi called for economic renewal and wealth creation in his country, saying, “Misery does not go along with democracy.” He called for a deeper U.S.-African partnership, as well as U.N. Security Council action against piracy off the West African coast. On the meeting with Obama, Yayi said, “This shows how much the president cares and how much the president wants to give impetus to this partnership between Africa and the United States.”

Alpha Condé, President of the Republic of Guinea: A longtime opposition leader and former political science professor at the University of Paris, Condé was inaugurated in December as Guinea’s first democratically elected leader since independence in 1958. He survived an assassination attempt on July 19 after rockets and gunfire hit his residence in the capital Conakry, killing at least three people. Authorities have linked the attack to former senior Army officers, and dozens of people have been arrested as an investigation proceeds. The attack underscored the fragility of Guinea’s shift to democracy and its lack of a democratic tradition. Said Condé, “We must solve this problem of security without weakening human rights.” Condé acknowledged that “there’s a lot of hatred in Guinea,” but in both ethnic relations and politics, he called for “a time of national reconciliation.”

Mahamadou Issoufou, President of the Republic of Niger: Issoufou, a former speaker of the country’s National Assembly and, by training, a mining engineer, won a presidential election in March. He dwelled on security problems, including weapons trafficking and the risk that poverty can breed extremism. “These are the issues that weaken and imperil the democratic consolidation,” he said. “You cannot have democracy without security.” In response to a question about the political struggle over the U.S. debt and budget, Issoufou said the controversy points up the durability of rule of law and keeping political disagreement peaceful in the United States, as well as the limits on U.S. presidential power. “We want to inculcate this culture in our people,” he said.

Alassane Ouattara, President of the Republic of Côte d’Ivoire: Ouattara referred to the “unprecedented crisis” that delayed his taking office for six months as his country moved to competitive, multiparty elections. He called for reconciliation: “Everybody must talk to each other.” Ouattara said that strengthening internal security was the “second chapter” in his administration. “Security,” he said, “must be accompanied by freedoms, by respect for the law.” He played down ethnic tensions as a product of “political manipulation.” Said Ouattara, “Democracy means bringing everybody together….We need to be Ivorians first.” Ouattara is an economist and former senior official of the International Monetary Fund who has spent much of his adult life in the United States. He called on diaspora Ivorians to “come back” and help build the country’s economy. He said that “now it’s up to us to create a climate in our country” encouraging those Ivorians to return. 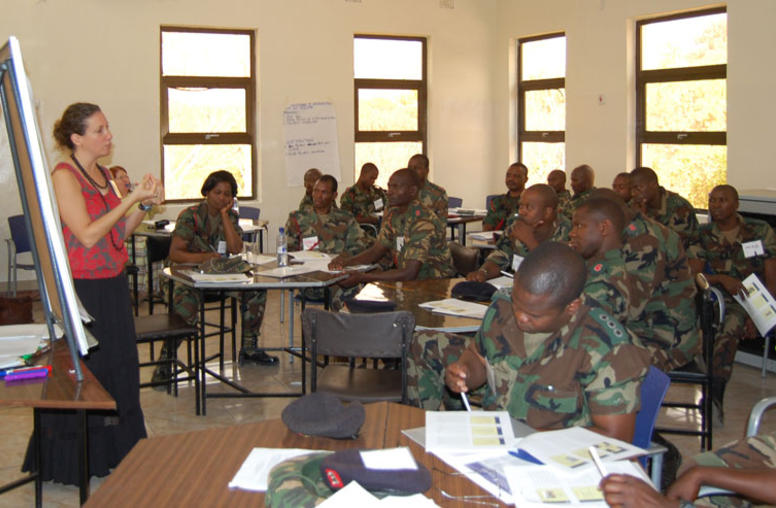 The U.S. Institute of Peace (USIP) has been expanding its training of African peacekeepers in 2012 above that in past years, and USIP’s unique role in this State Department-led program will be continuing at this new, faster pace.