What is Women, Peace and Security?

Women, Peace and Security (WPS) is a policy framework that recognizes that women must be critical actors in all efforts to achieve sustainable international peace and security. WPS promotes a gendered perspective and women’s equal and meaningful participation in peace processes, peacebuilding and security. The WPS Agenda evolved from the U.N. Security Council Resolution (UNSCR) 1325, which was unanimously adopted on October 31, 2000.

UNSCR 1325 addresses not only the disproportionate impacts of war on women but also the pivotal role women should and do play in conflict prevention, conflict management and sustainable peace efforts. UNSCR 1325’s framework consists of four pillars—participation, protection, prevention, and relief and recovery.

In a statement in 2005, the Security Council called upon U.N. Member States to continue implementing UNSCR 1325 through the development of National Action Plans (NAPs) to articulate their priorities and detail actions they will take to implement the objectives of UNSCR 1325. As of 2021, 103 countries have created and adopted NAPs.

On October 6, 2017, the U.S. Women, Peace and Security Act of 2017 was signed into law by President Donald Trump. The Act mandates training for relevant government personnel on WPS issues, encourages consultation with stakeholders regarding women’s participation in peace processes, and requires that the President submit a National Strategy on WPS to Congress. The U.S. Strategy on Women, Peace and Security was released in June 2019.

On March 8, 2021, President Joe Biden signed an executive order establishing the Gender Policy Council (GPC), the first freestanding policy council focused on gender equity and equality within the Executive Office of the President. The GPC seeks to advance gender equity and equality in both domestic and foreign policy development and implementation, working in coordination with the other White House policy councils and across all federal agencies to instill a strategic, whole-of-government approach to gender equality and gender equity. The National Strategy on Gender Equity and Equality was released in October 2021.

Each year the U.S. CSWG develops new strategic objectives to inform all efforts, planning priorities, activities and goals. The current goal of the working group is to foster greater inclusion across sectors and engage diverse stakeholders to advance the WPS agenda. This is carried out with the following objectives in mind:

Strengthening Engagement between the U.S. Government and U.S. Civil Society

As the “go-to” group of civil society experts on women, peace and security, the U.S. CSWG regularly engages with U.S. Government agencies, members of U.S. Congress and their staffers, as well as key councils and committees to ensure that the WPS agenda is incorporated at all levels.

Following the release of the U.S. Strategy on WPS, the U.S. CSWG is continuing its work to advise key stakeholders on issues related to WPS. Critical to this effort is working with U.S. Government agency officials charged with implementing the Strategy. Members of the working group have provided consultation and recommendations on the development and execution of each agency’s implementation plans, as well as interagency coordination. In 2021, the U.S. CSWG played an instrumental role in facilitating a U.S. interagency consultation with civil society that produced further recommendations submitted in response to the inaugural U.S. Government Women, Peace and Security Congressional Report.

Each of the U.S. Strategy on WPS 2020 implementation plans can be found using the links below:

Since its establishment in July 2010, the U.S. CSWG has facilitated over 50 public events and off-the record consultations to advance the WPS Agenda in the U.S. and globally. Through these engagements, the U.S. CSWG and its members work tirelessly to amplify voices from the field to ensure that the perspectives of frontline women peacebuilders are heard by the U.S. and global policymakers.

To view the U.S. CSWG’s public event celebrating the 20th anniversary of UNSCR 1325, visit the event page. The March 2021 town hall discussion with the Department of Defense can be viewed here.

The types of civil society organizations that join range in focus from academic research to practitioner-based work, but all include some component of the WPS agenda in their work. While member organizations may be involved in WPS advocacy, the U.S. CSWG does not engage in advocacy but rather serves to educate, build capacity and facilitate consultation among key stakeholders to advance the WPS agenda. Each organization has two representatives to be included on the listserv and remain in regular contact with the working group.

Please email gender@usip.org for more information on how to join the U.S. CSWG.

Working group members are producing an increasing amount of resources to aid policy shapers and other civil society organizations in their efforts to advance the WPS Agenda. Below is a sample of resources that members have recently produced. 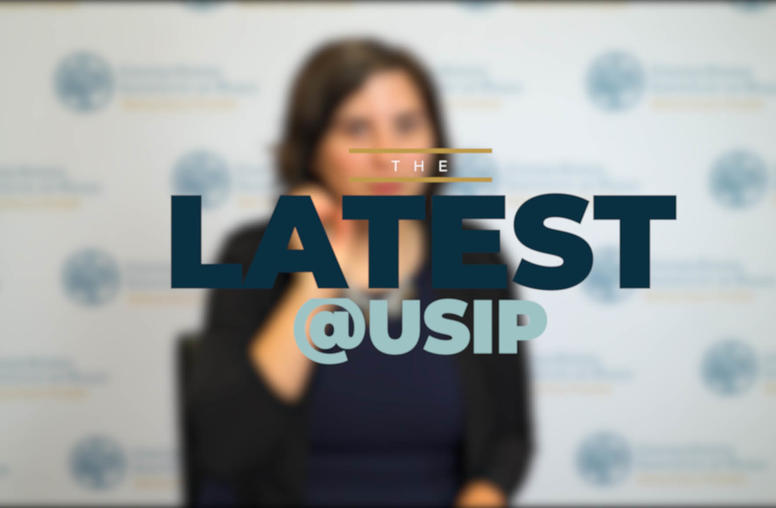 In collaboration with the U.S. CSWG, USIP hosts annual consultations between U.S. government and civil society representatives on Women, Peace and Security. The importance of such consultations is highlighted in video interviews with Deputy Undersecretary of Defense Michelle Strucke and Sanam Naraghi Anderlini, founder and CEO of the International Civil Society Action Network.