Land is at the root of many violent conflicts and wars around the world. In addition to fighting over land and related natural resources, rural landholding systems often sustain patterns of inequality and widespread rural poverty that generate conflict. This event co-sponsored by the U.S. Institute of Peace and the InterAmerica Foundation will examine the challenges of land tenure and the efforts at land reform in Colombia and Bolivia--two Latin American countries where the gap between the rich and poor is  among the greatest in the world.

Land is at the root of many violent conflicts and wars around the world. In addition to fighting over land and related natural resources, rural landholding systems often sustain patterns of gross inequality and widespread rural poverty that generate conflict. Land concentration, displacement, and the denial of land rights contribute further to patterns of political exclusion and disenfranchisement. Highly concentrated landholdings often significantly shape patterns of inequitable rural development. On the other hand, peace practitioners and development specialists agree on the potential role of broad-based rural development and land reform as stabilizing elements for polarized or conflicted societies. This event will examine recent patterns of land tenure and land reform in Colombia and Bolivia--two Latin American countries where the gap between the rich and poor has historically been most severe.

The morning panel from 9:00am-10:30am will examine the contemporary historic context that gave rise to current inequities in Colombia and Bolivia (particularly in the Santa Cruz region). A subsequent panel from 10:45am-12:15pm will analyze the land reform initiatives and other efforts by Colombian and Bolivian governments, international aid agencies, and nongovernmental organizations to address these inequities, and will evaluate lessons that might be drawn from these experiences. A luncheon will feature a keynote address by Representative Henry Johnson (D-GA), who has been a leader in the U.S. Congress on behalf of Colombia’s displaced populations. The luncheon will have limited seating and RSVPs are required.

In Colombia, protesters are demanding that President Ivan Duque address concerns over economic inequality, corruption, the Venezuela crisis and implementation of the 2016 FARC peace accord in what USIP’s Steve Hege calls the country’s “largest mass mobilization in four decades.”

It began with a few supporters of Colombia’s 2016 peace agreement meeting at a Bogota cultural center. That gathering, in January of this year, soon led to the creation of a WhatsApp group—a platform to discuss how to how to defend the interests of peace amid concerns about the policies of the new government. By mid-July, a spontaneous citizens movement of thousands of Colombian leaders was making its voice heard. Its objectives: to strengthen popular support for the previous government’s peace deal with the rebels of the Revolutionary Armed Forces of Colombia (FARC) and to support the peace process with the National Liberation Army (ELN). 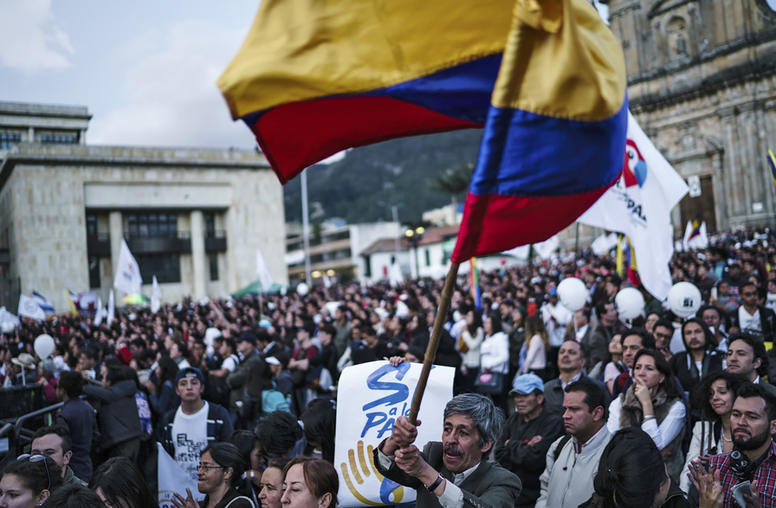 The peace accord that halted a half-century of violent conflict in Colombia has reached a critical juncture. With the population almost evenly split over the terms of the 2016 agreement and a new government led by the party that opposed it, analysts and political figures see sustainable peace as increasingly endangered.